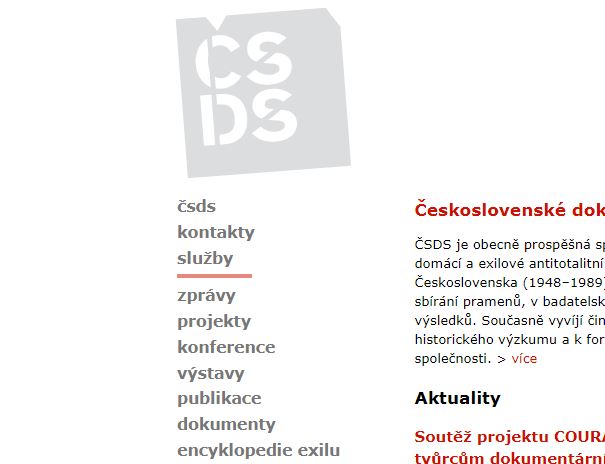 The Czechoslovak Documentation Centre for Independent Literature (CSDS) was founded in March 1986 in the Federal Republic of Germany. Its founding members were significant personalities of the then Czechoslovak exile: Jiří Gruša, František Janouch, Josef Jelínek, Ivo Kunstýř, Ivan Medek, Jiří Pelikán, Vilém Prečan, Karel Jan Schwarzenberg, Pavel Tigrid, Jan Vladislav and Ľubomír Ďurovič. Since November 1986, the center of Schwarzenberg, Bavarian Scheinfeld, has been home to work and study facilities. Historian Vilém Prečan has been the director and curator of the Documentation Center since its foundation. After his emigration in 1976, he sought to build an archive of independent Czech and Slovak literature and a research center to stimulate and organize studies on independent activities in Czechoslovakia after 1968.

Since its inception, the Documentation Center has combined the functions of a literary archive, a specialized library and research, study, information and publishing facilities. The centerpiece of the center's activities was the effort for all-round effective aid for domestic dissent and civic initiatives in Czechoslovakia.

Prečan systematically collected testimony of independent thinking and creation in Czechoslovakia after 1948, related to independent cultural, political and religious activities. First to be developed were collections of Czech and Slovak samizdat literature, which was constantly threatened at home with seizure by the State Security. These original samizdat texts and periodicals of ČSDS were copied and regularly distributed to large libraries, especially university libraries, editions of exile magazines, radio stations and human rights organizations. In this way, the center assisted in ensuring that works of independent Czech and Slovak literature and information on home dissent flowed smoothly into the information system of the free world.

ČSDS also produced its own publications. The most important was the magazine Acta, which was published both in Czech and English, and along with articles of a literary nature, bibliographic catalogs of samizdat editions also appeared.

In addition, ČSDS helped to smuggle books, magazines, documents and technical equipment for producing samizdat literature, such as copiers and, later, computers.

This archive, which was unique in the history of European exiles, received the Friedrich Bauer Literature Award in October 1993 from the Bavarian Academy of Fine Arts in Munich.

After 1989 there was a gradual transformation of ČSDS into a non-state research institute for the history of anti-totalitarian resistance in the Communist era. In September 2000 its collections moved to the Czech Republic and in 2003 they were transferred to the National Museum.