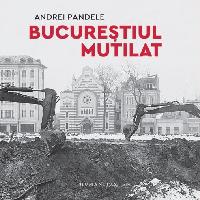 The book-album Bucureștiul mutilat (Mutilated Bucharest, 2018) offers an anthology of over 150 photographs taken by Andrei Pandele and several dozen others by some of his friends and colleagues (Dan Vartanian, Dan Dinescu, Sorin Vasilescu, Peter Derer, Şerban Lăcriţeanu, Andrei Bîrsan, Nic Hanu, and Radu Ştefănescu). Through a photographic discourse of great visual and emotional impact, the book presents the most important landmarks in the terrible operation of mutilation and uglification of the capital in the last years of Romanian communism. It also draws attention, through some dozens of photographs, to some important aspects of everyday life during communism in the period 1975–1989, especially in Bucharest. “On the orders of a primitive and megalomaniac tyrant, more was demolished in peace time than that was destroyed by two world wars and two major earthquakes (those of 1940 and 1977),” states Andrei Pandele. Bucureștiul mutilat tells the story of many of the areas demolished according to the directions of the Ceaușescu couple, and is in a way an act of justice on the level of history inasmuch as the photographs in the book represent part of the memory lost  and the beauty destroyed, savagely, in Bucharest by communism. In short, it is a photographic commemoration of the destructions ordered by the officials of the communist regime in the 1980s, as a consequence of which a large part of the centre of the capital was truly mutilated. In basic, concrete terms: 5.86 km2 of the historic centre demolished; 1.66 km2 turned to waste ground overgrown with weeds; approximately 20,000 properties destroyed; over 60,000 families forced to move; 19 streets blocked or no longer existing at all; Orthodox churches, monasteries, synagogues, and other monuments wiped from the face of the earth; eight churches translated and hidden among apartment blocks. The book Bucureștiul mutilat was published, to a high graphic standard, at the most prestigious publishing house in Romania, Humanitas, and enjoyed considerable public and media exposure. The principal moment of public debate regarding the volume was moderated by Cristian Pătrășconiu, a researcher in the COURAGE H2020 project.

The collection was made after an interview with Vytautas Umbrasas about the Student Scientific Society at Vilnius University. During the first interview (on 17 January 2018), Umbrasas mentioned briefly that he may have some letters and documents about the society's activities, and correspondence with Mart Laar. The researcher of the project Grybkauskas stressed the importance of this kind of documentation. During the second interview (25 January 2018), Umbrasas gave letters, drafts and other documents to the researcher to be deposited in the archives of the Lithuanian Institute of History, thus establishing the collection. 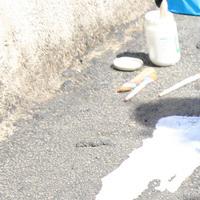 Event (general): Restoration of the graffiti in Rijeka made by members of the punk band Paraf at the initiative of Velid Đekić, 2018

The members of the punk band Paraf in 1977 wrote "Paraf/punk" as graffiti on a stairway in Rijeka. At the initiative of Velid Đekić, in 2018 this graffiti was protected by the Rijeka city council as a cultural property of local significance. The City of Rijeka also paid for the restoration of graffiti. Thanks to Đekić, graffiti is today considered a monument that marks the beginning of the punk counterculture in Rijeka. Graffiti is, with its coarse appearance, fully consistent with the principles of the punk rock movement that wants to disrupt imposed social boundaries.

Since the graffiti was created before the first official concert by the punk band Paraf, it may be concluded that with this graffiti the band wanted to herald the emergence of a new musical expression, i.e. the change that punk rock signified on the Rijeka music scene at the time. How much ahead of its time this was is reflected in the fact that today graffiti is considered a part of pop culture and is used regularly to announce or criticize socially significant events.

Exhibition: Allen Ginsberg - King Majales
At the opening ceremony, an exhibition about American beatnik Allen Ginsberg opened and was held in the Centre for Queer Memory in Prague from January to April 2018. One significant acquisition of the Society for Queer Memory collections was introduced during this exhibition. The Society had bought a rare facsimile of the poem “Kral Majales” by Allen Ginsberg, written in 1965. The poem, visually arranged by American painter Robert LaVigne, represents an impressive artistic work reflecting Ginsberg’s dramatic stay in Prague in 1965 and documenting an exceptional moment in Czech queer history. Allen Ginsberg took part in the students’ May Celebrations “Majales” and was elected “Král Majálesu” (“King of the Majales”). However, he was later arrested and expelled from Czechoslovakia for allegedly indecent behaviour. The exhibition, as well as an accompanying lecture, presented the events associated with Ginsberg’s stay and reactions to his Prague visit in historical documents and current sources. The poem “Kral Majales”, translated into Czech by Jan Zábrana, was also recited at the opening ceremony of the exhibition.
прочети повече
861 - 865
«« предишна страница 1 ... 164 165 166 167 168 169 170 171 172 173 174 следваща страница »»