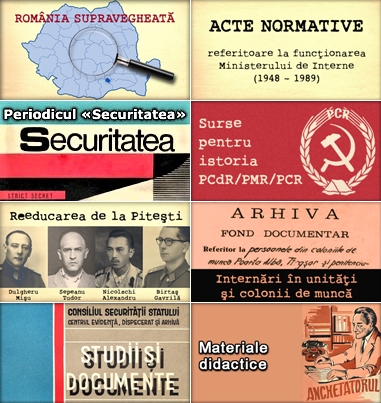 The CNSAS Online Collection (CNSAS – Romanian acronym for the National Council for the Study of the Securitate Archives) illustrates how the communist secret police, the Securitate, conceptualised: (1) oppositional groups and individuals in communist Romania; (2) the forms in which this opposition manifested against the party-state; and (3) the transnational support it received from the exile community and foreign organisations. It also encompasses an impressive amount of invaluable information about the inner mechanisms of the Securitate, its institutional development and relationship with the Communist Party, the use of repression against any form of opposition, and the use of surveillance to avoid the development of oppositional groups and networks during its over forty years of functioning. In brief, this collection offers a comprehensive image of the means and methods used by the communist secret police, the Securitate, to deal with the anti-communist opposition between 1948 and 1989, and the response it received from oppositional groups and individuals.