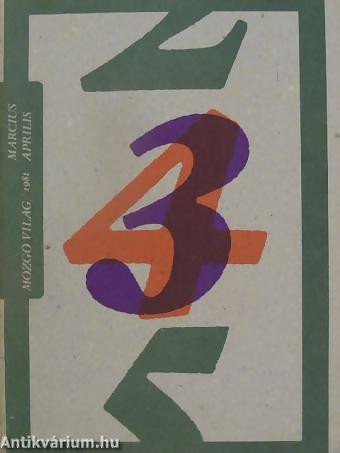 After a few months break, when the journal was coming close to its end, the restart of “World in Move” with its double issue of March–April 1981 seemed to be not just a positive sign of survival, but a real promise of a rebirth. The newly designated chief editor, Ferenc Kulin, together with his very much tried and tested editorial team, managed to get rid of direct censorship from the Central Committee of the Communist Youth League, and was offered another chance by the main cultural commissar, György Aczél himself, “to prove their talents.” No doubt they tried to do their best on the 224 pages of the book-sized double issue.

On the first two pages there was an editorial addressed to readers briefly summing up the recent changes in and around the paper, and drafting further plans for the future. As it was stated, a long decade passed since the start of “World in Move,” and after a prolonged period as a “youth paper,” it was high time to become a forum for adults with full responsibilities. It is true that in two short paragraphs one can be read the obligatory ideological “loyalty statement” of all legally published papers (“engagement with socialism, dialectical and historical materialism,” etc.), but more important is the list of radical claims for free public debates in all fields of life: in politics, culture, arts, literature, science, education, and so on.

These ambitions are well reflected by the content of the double issue: finely written poems, short stories, plays, essays, studies, reviews, and critiques of contemporary books, films, music, and theater performances, experimental art pieces, passionate public debates (on schools and higher education), a series of socially authentic photographs (like teenage kids at rock festivals). The world seemed to be moving dynamically, and the journal “World in Move” did too – at least for a few years to come … until the end of 1983.