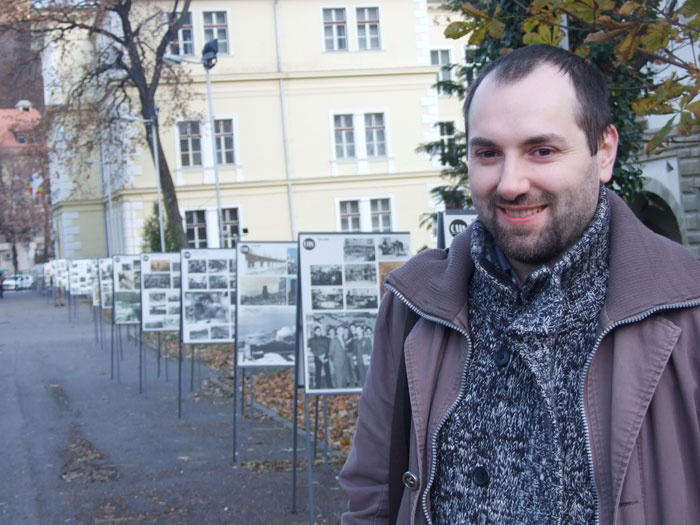 Architect Ovidiu Marian Taloş is the initiator of the Orașul Memorabil (The Memorable City) project, whose purpose is to salvage the photographic heritage concerning the history of the city of Braşov. Born in Braşov on 21 June 1978, Taloș studied at the Ion Mincu University of Architecture and Urbanism in Bucharest from 1997 to 2003. In 2005, he took his master’s degree in the Anthropology of the Sacred Space at the same university. Since completing his traineeship, he has practised as an architect in Braşov. He is a member of the Romanian Order of Architects–Braşov, Covasna, and Harghita Branch (Ordinul Arhitecţilor din România–Filiala Teritorială Braşov, Covasna, Harghita) and of its territorial committee, one of the leading structures of this regional branch. Professionally, he has distinguished himself through awards received for architectural projects, namely, first prize at the “No man’s land-uri urbane” (Urban no-man’s-lands) contest organised in Braşov in 2009 and an honourable mention at “Open Source House–Ghana” at Delft University of Technology the following year.
In 2010, he laid the foundations of the cultural project Orașul Memorabil, which he coordinated with Miruna Stroe. By virtue of numerous people’s providing photographic material, the project gave rise to a digital archive reflecting the history of Braşov through daily life. Approximately a third of the Braşov–Oraşul Memorabil Collection covers the communist period. Some of the photos reflect the photographers’ critical view on social realities in communist Romania. Exceptional cases in point are those photos that feature the urban policy of the communist authorities, which led to the demolition of buildings and even whole areas in Braşov. The project’s photographic archive has been promoted through annual displays placed in public spaces in Braşov, but also through the project’s online website. Using the photographic heritage of the Orașul Memorabil project, Ovidiu Taloş has set up exhibitions hosted by the Romanian Cultural Institute in Budapest (2012–2013), the Romanian Cultural Institute in Vienna (2014) and Haus des Deutschen Ostens (House of East European Germans) in Munich in 2014. The exhibitions were organised in collaboration with the GIL Corona association and the Romanian Cultural Institute. Apart from the Oraşul Memorabil project, Ovidiu Taloş initiated and coordinated from 2012 to 2015, together with Miruna Stroe, the cultural projects Arhitecții și arhitectura în Brașov, 1870–1914 (Architects and architecture in Braşov, 1870-1914) and Arhitecții și arhitectura industrială în Brașov (Architects and industrial architecture in Braşov). These projects were financed by the local authorities of Braşov and from the architectural stamp tax collected and administrated by the Romanian Order of Architects.