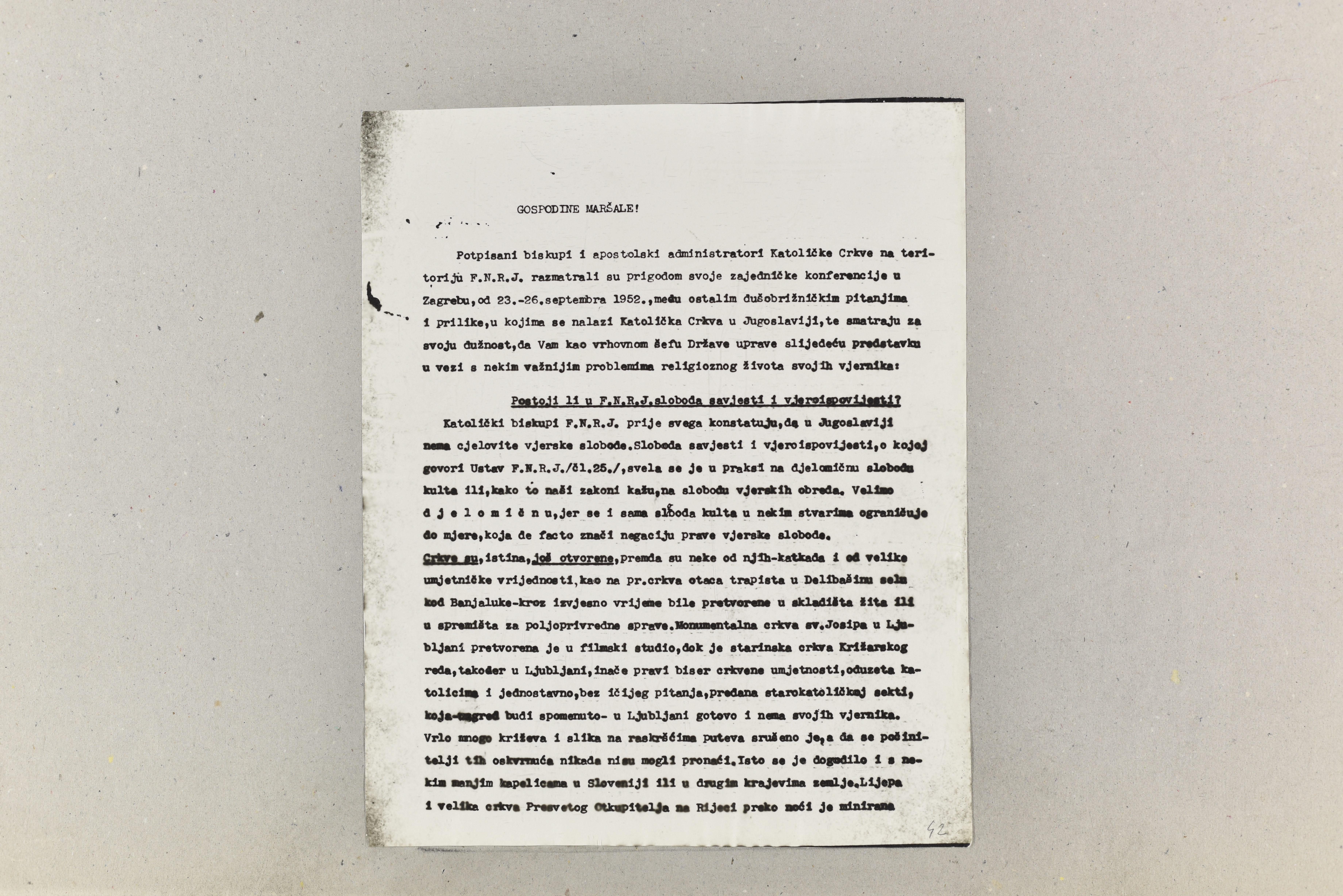 The State Security Service paid close attention to the course and conclusions of religious meetings (conferences, councils). The Service prepared reports (information) on such meetings, and in addition to these reports it collected and attached copies of materials originally prepared for and used at such meetings. The Service also interrogated individual participants in the meetings, and drew up reports on that as well.

An example of such practices are the documents (approximately 200 pages, code 001/16) on the Conference of Bishops in Zagreb from 22 to 26 September 1952. One of the main topics of the conference was the stance on Roman Catholic clergy associations, whose establishment was encouraged by the communist authorities with the assistance of loyal priests with the intention of breaking Church unity. On the basis of an opinion secretly sought from the Vatican, the bishops adopted a decision to prohibit these clergy associations. This is why the Yugoslav Government submitted a protest note to the Vatican, accusing it of interfering in internal affairs. The elevation of Aloysius Stepinac to the rank of cardinal was cited by the Yugoslav Government as grounds to sever diplomatic ties with the Vatican   (Akmadža 2003, p. 171-202).

In addition to an internal report about the conference (conference summary), these documents of the Croatian State Security Service have attached to them the records of interviews with bishops who participated in a conference, transcripts of the conference minutes, working papers and the adopted resolutions. Among them is a copy of petition sent on the last day of the conference from the Yugoslavian Catholic bishops to Josip Broz Tito. In a ten-page document, the bishops criticise state's previous attitude toward the Roman Catholic Church and openly demand favourable treatment. Inter alia, they specify that in Yugoslavia “there is no freedom of conscience and religion, rather the Catholic Church has been denied basic religious freedoms and its vital rights are threatened.” With reference to the aforementioned clergy associations, it was observed that “their role is to break down ecclesiastical discipline and progressively weaken religious life, and not to normalise the relations between the Church and State.” In the conclusion of the petition (“Our final word”) they sought freedom of religious education, Catholic press and religious organisation, as well as unfettered use of the resources necessary for those purposes. In the context of the aforementioned severing of diplomatic ties between Yugoslavia and the Vatican at the end of that year, instead of improving, state policy toward the Catholic Church grew worse.

The document is available for research and copying.