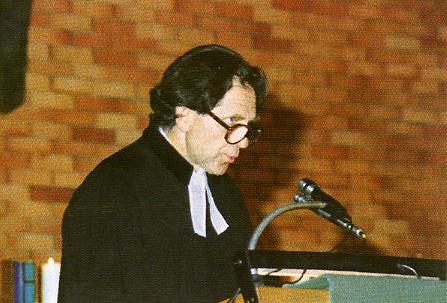 István Szépfalusi (1932–2000) was a Hungarian Lutheran clergyman and professor. He was born István Seligmann in Budapest. He studied at the Lutheran Grammar School in Budapest. In 1948, after he passed an exam to be an assistant jeweller, he decided to become a Lutheran priest. He became a Lutheran clergyman in 1955, and then he emigrated to Austria. On 5 November 1956, he became the national caretaker of refugees of the Austrian Lutheran Church. For decades he helped immigrants from the Carpathian Basin. In 1960, he was a founding member of the Bornemissza Péter Society in Vienna. Until 1982, he served as the secretary of the European Protestant Hungarian Free University. The autobiographies of evangelical bishop Lajos Ordass were published with the cooperation of István Szépfalusi.