In 1952, László Lajtha coauthored a play entitled The Exiled Maid: A Chronicle from 1764 (Bujdosó Lány, Krónika 1764-ből), which was performed nine times but which within a year had been prohibited by the regime. His coauthor was Áron Tamási, an ethnic Hungarian author from Transylvania. The story of the play is very simple. It is a monologue based on the story of the Massacre at Mádéfalva (Siculeni, Romania). The play consists of four folksongs in Lajtha’s adaptation. Lajtha collected these songs during his collecting trips in Transylvania between 1911 and 1914 and in 1943. Tamási wrote texts before, between, and after the songs. They finished the work in 1952, and the main actress was the also unheeded Márta Mezey (1909–1983). The monologue must have been extraordinary and bold. First, it was based on Transylvanian songs instead of Soviet ones, and the writers, Lajtha and Tamási, were so-called déclassé elements (meaning people who earlier had been members of the middle class but who had lost their social positions and were regarded as enemies by the socialist state). Within a year, it had been banned by the regime. Seven years later, as the Kádár regime began to adopt a different cultural policy, Bujdosó lány was performed again, with Mezey in the role again.
Tamási moved to Hungary in 1944 and stayed in the country until his death. In the bequest, one finds many documents in connection with him, since he and Lajtha were friends. 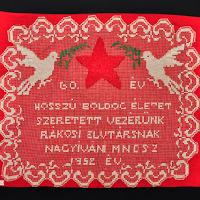 Exhibition: The Life of Comrade Rákosi. 1952

On 9 March 1952, a grandiose exhibition was opened about the life of the communist leader, Mátyás Rákosi.
It was organized on his 60th birthday. The party was held at the Munkásmozgalmi Intézet (Institute of the Labour Movement), in the building that housed the Museum of Ethnography until 2018, and which had previously housed the Supreme Court that sentenced Rákosi to years-long imprisonment in 1937.
The exhibition had two parts: an eight-room presentation of Rákosi’s life, and twenty-five rooms of gifts given to Rákosi. These gifts were extraordinary because they showed the new form of Hungarian folk art, in which folk art symbols were mixed with the symbols of socialism. After the exhibition closed, the objects were not inventoried in the collections of the Museum of Ethnography. The museologist ignored them until the 1960–70s. In 2012, the Museum of Ethnography put the folk-art exhibition of the collection on display under the title Rakosi60@neprajz.hu. Curators worked to ensure that this exhibition presented the original objects in a memorial context to reflect the previous conception; they thought it important to show more interpretations of an exhibition that was surrounded by unspoken rejection.
Here you can find a list of the exhibited objects: http://rakosi60.blogspot.hu/

The second phase of HSAE collection was much longer: 40 years, from 1953 to 1993. This collection was organized and supervised by Gábor Bodnár, mostly from his home in Garfield, New Jersey. This collection reflected the “second rebirth” of the Hungarian scouting movement worldwide in 15 countries on 4 continents. The central bodies and administration were consolidated and more and more printed materials, bulletins, scouting books, calendars, etc., can be found among the papers.

прочети повече
Donation of the Augustin Juretić Collection to the Pontifical Croatian College of St. Jerome, 1954.

After the death of Msgr. Augustin Juretić in 1954, his legacy was inherited by his friends, Msgr. Pavao Jesih and Adil Zulfikarpašić. Msgr. Jesih gave his part of the inheritance to the Pontifical Croatian College of St. Jerome in the same year. According to the notes made by Reverend Andrija Lukinović in the General Inventory of the College Archives, the largest part of Msgr. Juretić’s legacy was inherited by Adil Zulfikarpašić and is now in the Bosniak Institute in Sarajevo. This information was also mentioned by Tomislav Jonjić in his article “On the attempt to establish a Croatian Committee in Switzerland in 1943: the diplomatic reports of Josip Milković of Senj,” which was published in Senski zbornik in 2011. However, the Bosniak Institute denies the possession of these materials, so their whereabouts remain unknown.

In 1956, István Viczián, a Protestant youngster, started to collect photographs and letters about the Calvinist youth congregation of Pasarét. Soon he had created a large private collection on the history of religious life under socialism.