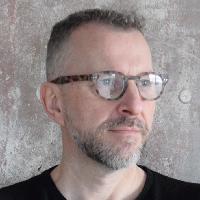 Marcin Rutkiewicz (born 1966) is a curator and animator of street art in Poland, an animator of the club music scene, an author of publications on graffiti, street art, and art in the public space, as well as a social activist involved in the reduction of the visual pollution caused by outdoor advertising.
In 2007, Rutkiewicz was one of the co-founders of the association Miasto Moje A w Nim, in which for the next few years as a vice-president he fought for the regulation of outdoor advertising in Poland, the adoption of statutory rules for outdoor use and law enforcement. In 2009, together with Elżbieta Dymna, he published the album Polski outdoor, documenting the scale of littering public spaces by advertising.
At the same time, Rutkiewicz dealt with street art. As a founder and president of the Outdoor Art Foundation, he conducted many street art projects, one of the most important of which was the outer graffiti gallery Forty / Forty at the Bema Forts in Warsaw. Together with Elżbieta Dymna, he published two albums about street art in Poland: in 2010, Polish street art, and two years later its continuation Between Anarchy and Gallery. Also with Dymna, in 2015, he published the Forty / Forty Gallery, dedicated to the gallery he was the curator of.
In 2011, Rutkiewicz together with Tomasz Sikorski issued the book Graffiti in Poland 1940-2010, and in 2017 – with Sikorski and Michał Warda – he co-curated the exhibition Wild Graphics. Half a Century of Visual Diversion in Poland 1967-2017 at the Warsaw Poster Museum. In the same year and under the same title, a publication accompanying the exhibition was published, in which Rutkiewicz figures as the author of one of the critical essays. From 2012 to 2016 he was a member of the Program Board of the International Poster Biennial in Warsaw.
In 2015, president Bronisław Komorowski awarded Rutkiewicz with the Bronze Cross of Merit for the service for the protection of Polish cultural landscape. 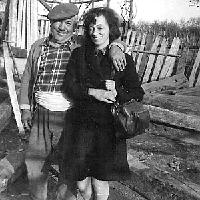 Hedwig Ulrike Ruşdea (née Weindel) was a specialist in pre-industrial mill technology, who established herself at the Museum of Folk Technics (later ASTRA Museum) by identifying, researching, and rescuing many windmills from the region of Dobrogea, which she reassembled in the permanent open-air exhibition of the museum in the 1960s and 1970s. She was born in Sibiu on 20 June 1924 into a family of Transylvanian Saxon intellectuals. Her parents were doctors and researchers in the field of natural sciences. After leaving the Girls’ High-School in Sibiu in 1943, she enrolled in the Faculty of Medicine of the University of Cluj. In 1947, she abandoned her medical studies in favour of German studies at the same university. In 1951, she completed her undergraduate degree in German studies at the University of Bucharest because the department in Cluj had been closed. From 1955 to 1957, she worked at the official German-language newspaper in communist Romania, Neuer Weg. In 1953, she married the Romanian doctor Dan Ruşdea. From 1958 to 1961, she worked with researchers at the Sibiu branch of the Romanian Academy on the project entitled Dictionary of Transylvanian Saxon Dialects (Siebenbürgisch-Sächsischen Wörterbuch).
In May 1962, she was hired at the Brukenthal Museum where, under the coordination of Cornel Irimie, she contributed to the foundation of the Museum of Folk Technics. After 1964, she was in charge of the part of the permanent open-air exhibition dealing with pre-industrial means of transportation. She was also part of the museum’s teams that conducted field research. She specialised in pre-industrial mills, and coordinated the rescue of five windmills from Dobrogea. Her comparative research on Romanian windmills earned her international recognition. Together with Cornel Irimie, the director of the Museum of Folk Technics, she attended the Second International Symposium of Molinology in Copenhagen in 1969. Subsequently, she was invited to deliver presentations at many international conferences on this topic. She later used her experience as a researcher at the Museum to found the Heimatmuseum (Transylvanian Saxons’ Homeland Museum) at Cisnădioara (Michelsberg in German) in 1971. In 1987, due to the severe travel limitations on foreign travel and everyday shortages of basic products in the Romania of the 1980s, Ruşdea emigrated to Germany, where she continued her researches in molinology. She died on 18 February 2009 in Heidelberg.
Due to her remarkable achievements, Ruşdea established herself as a leading ethnographer at the Museum of Folk Technics in Sibiu. She contributed decisively to the rescue of a cultural heritage that would otherwise have been destroyed by the communist regime’s agricultural modernisation drive. She also conducted ethnographic research in the villages from which artefacts of peasant technics were rescued. This field research produced valuable historical and social data about rural society in Dobrogea and the effects of communist modernisation policies on its cultural heritage.

The agent with the cover name “Rábai” worked in a printing house in Zalaegerszeg. He got in touch with the alternative religious group “Christian Community,” with the help of Vilmos Kaczor, one of his colleagues. He wrote reports about the community of his own free will. He participated in the group’s meetings, and he talked with the members of the group, but he was not invited to take part in the camping excursion in the summer of 1984, and it was this excurions that really interested the state security forces. Consequently, secret officers in camouflage documented the events. 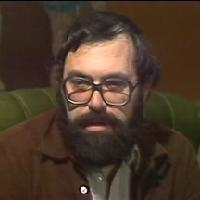 Ráday, Mihály
Mihály Ráday (1942) was a Hungarian cameraman, director, and politician. He also served as president of the Municipal Association for the Protection of Budapest. He has been working with Hungarian Television since 1968. Ráday created the ‘Nor will our grandchildren see...’ TV-programme, which presented Hungarian national monuments. He was a cofounder of the National Pantheon Foundation, the Municipal Association for the Protection of Budapest (in 1983), and the Fellowship of the Town and Village Protectors in 1986. From 1990 to 1994, Ráday had an electoral mandate in the Hungarian Parliament as a member of SZDSZ (Alliance of Free Democrats), and for 17 years he was also a member of the General Assembly of Budapest. He did a great deal to protect Hungarian national monuments.
прочети повече
Rév, István

István Rév (1951) is a Hungarian historian and professor. From 1969 to 1975, he studied history, English language and English-language literature, and sociology at Eötvös Loránd University, Budapest. Between 1975 and 1985, he worked at the Hungarian Academy of Sciences. In 1984, he was one of the founders of the environmental movement “Danube Circle.” From 1985 to 1991, he worked at the Karl Marx University of Economics. In 1991, he became a professor at Central European University, and between 1991 and 1993 he was the director of the University’s Budapest College. In 1998, he became the director of the Open Society Archives.